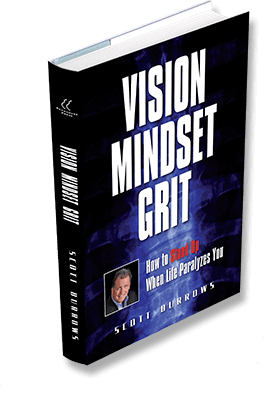 Vision Mindset Grit : How to Stand Up When Life Paralyzes You (Book and eBook)

What if the measure of your success is only determined by how well you adapt to change, doubt, uncertainty and fear? What belief system must you possess to conquer those challenges? Only rare events force people to change. Even more rare are those individuals who can inspire people to the core and move them to action.

tt Burrows’ riveting story of overcoming adversity through sheer determination, will power and goal setting is infectious. Scott played college football at Florida State University under coach Bobby Bowden and was a top-ranked kickboxing champion, having his last fight broadcast by ESPN. His future was filled with promise until November 3, 1984 when, at the age of 19, he was critically injured in a disastrous automobile accident and everything changed in the blink of an eye. Scott survived, but was paralyzed and diagnosed a quadriplegic.

Despite this grim prognosis, he refused to be sidelined. He endured years of grueling physical therapy, learned to walk again with the aid of a cane, graduated from college and had a successful career in the insurance and financial industry—even qualifying for the Million Dollar Round Table (MDRT), a 100% commission-driven award that fewer than 8% of agents worldwide achieve yearly. Later, Scott became a world-class motivational speaker.

Vision, Mindset and Grit—three powerful words that describe Scott Burrows—will also inspire you to achieve your absolute best. This book is more than the story of Scott’s determination to overcome enormous obstacles and rebuild his life. It is a testament to his intention to inspire others and help them triumph over adversity as well. He has shared his message of hope and success with audiences throughout the world and motivated them to make positive changes in their own lives.

“When you first meet some people, you can instantly tell what ignites their hearts and souls. Scott Burrows is one of those exceptional individuals who not only sows seeds that benefit others, he helps people grow to reach their potential. We all have a desire to make a difference in our world…Scott Burrows does! Vision Mindset Grit is interesting, insightful and a fresh outlook on achieving the impossible. A must-read book for every person who aspires to stay positive no matter what challenges arise. This is truly a great book!”
Steve Gilliland, Bestselling Author of “Enjoy The Ride™” & Member, Speaker Hall of Fame

“I have known Scott Burrows for many years and am always inspired in his presence. He took a terrible situation and decided never to be defeated by it. His courage, his sense of purpose, even his sense of humor in the midst of potential tragedy that flows through this book are instructive for all of us. I hope you’ll adopt his three-part formula as you face difficulties in your life.”
Lou Heckler, Business Keynote Speaker & Speaker Coach, Commentator, “Nightly Business Report” on PBS

“Scott Burrows is the kind of man that world champions will look up to. I know, because I am an 11-time world champion, and he is my HERO! His ‘formula’ for success is not just a theory, but a proven way to accomplish your goals in life. Scott, like many who achieve greatness, leads by example. This book will show you the way by detailing his personal journey to master Vision, Mindset and Grit.”
Don “The Dragon” Wilson, Champion Kickboxer & Actor

“Your story not only reminds us that each one of us may face unforeseen obstacles, but with perseverance, grace and a little sense of humor, your attitude can change your course forever!”
Carolyn Salvador, Executive Director, Georgia Child Care Association

“You make it clear that we all can attain new heights in our personal and professional lives if we only face adversity with resolve and never give in.”
Brent Stombaugh, President / CEO, Brookside Laboratories, Inc.

Order securely in our store